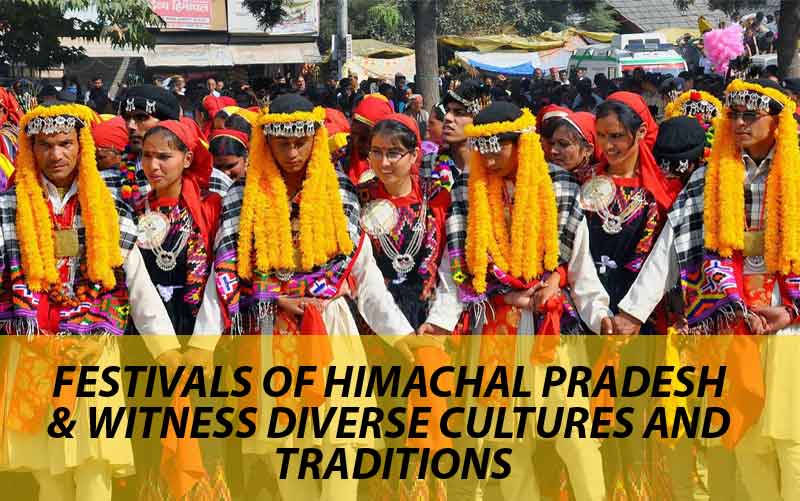 Himachal Pradesh has picturesque valleys, snow-covered mountains, adventure sports, green surroundings luring travelers from all over the world. In addition to picturesque surroundings, the state celebrates several festivals of Himachal Pradesh which are quite popular not among the locals but the tourists as well. The festivals differ in terms of scale but many of them are attended by huge crowds who look forward to the rich legacy and rituals of their ancestors.

Halda festival is celebrated to welcome the New Year by paying tribute to Shashikar Apa, the goddess of wealth. It is one of the main festivals of Himachal Pradesh. To celebrate this festival, a special ceremony is organized during the day where devotees worship the goddess and seek her blessings. The actual festival is celebrated by the Lamas and the people of Lahaul areas are integrated as well as enjoy their new year by performing dance and singing songs. During night, several dance and musical programs, bonfires, grand feasts, and heavy cocktails are organized. The bonfire is considered a symbol of solidarity and harmony in the community.

The main attractions of Kullu Dussehra include a colorful procession of Lord Raghunath and the Kala Kendra festival wherein different activities and cultural events are arranged to make the evenings more engaging and entertaining.

Along with organizing several famous festival of Himachal Pradesh, the state is also famous among travelers and adventure lovers who want to enjoy different kinds of ice skating activities. During the winter season, the Himachal Pradesh transforms into a winter wonderland and several activities are arranged then. Ice Skating Carnival held at HP is among the most famous festivals held during the winter season. This festival is held at Asia’s largest natural ice-skating rink and snow lovers can take part in different levels. The state organizes many fancy dress competitions and dance shows to gather the attention of visitors. If you are among the ones who are planning a vacation in Himachal Pradesh, then winter is the right time to make the plans. You can book your tickets in advance at Honeymoon Bug and get great deals on flight tickets, hotels, etc.

Siar festival is celebrated every year in the interiors of Shimla, Mandi, Kullu, and Solan; the festival is celebrated in mid-September. The festival of Sair is celebrated to observe the return of the Gods from heaven and the end of the harvest season. Sair is also one of the unique Himachal Pradesh famous festival as it is quite similar to the world-famous Bull Fight of Athens in Sparta. The crowd gathering fight between the Beasts and various cultural performances get noticed by the visitors taking part in the Sair festival.  Also, at this time, a big fair is organized and many stalls are put up to promote handicrafts by local artisans and culinary delights of the state. Siar Festival is one of the most interesting festivals celebrated in Himachal Pradesh and if you are coming here, you must not miss attending this festival at all.

Losar is also being known as the Tibetan New Year. The Losar festival is celebrated across all the monasteries located in Himachal Pradesh, the festival is celebrated by welcoming the New Year in a beautiful way. People worship the holy deity of the monastery who brings peace, good fortune, and happiness to the lives of people. The celebrations are a combination of rituals and age-old customs, giving visitors a deep insight into the Tibetan culture and beliefs.

As part of the traditions and rituals, the Lamas wear colorful masks and dances; folk music, chanting, drama, prayers, and Tibetan opera are some other key attractions of Losar, which is considered one of the main festivals of Himachal Pradesh.  Losar is celebrated with great enthusiasm across different Tibetan towns of Himachal Pradesh whilst Dorje Drak Monastery in Shimla, Tsuglagkhang Temple in Mcleodganj, and Shashur Monastery in Spiti Valley. The festival is celebrated in February at all the monasteries throughout Himachal Pradesh

The International Himalayan Festival is a fascinating festival that celebrates the holiness of the Dalai Lama’s Nobel Peace Prize. The festival is celebrated aiming to build harmonious relations across different local communities, the duration of this festival is three days. Some of the main highlights of this International Himalayan Festival include Tibetan Institute of Performing Arts students who take part in various cultural events and performances.

Dongri fair is another famous festival of Himachal Pradesh which is held at the Hadimba Temple in Kullu. The festival is celebrated to mark the arrival of spring, another name of Doongri Fair festival is ‘Hadimba Devi Fair.’ People who love colors and want to have an entire view of the Valley of Gods or Kullu Valley must take part in this festival. The major crowd seekers of this festival include musical and dance performances by local artists.  The festival is celebrated in May and is organized at Kullu Valley.

Baisakhi is also being known as Bisowa in Kangra, Bissue in Shimla hills and Lisshoo in Pangi-Chamba. The festival is celebrated on 13th of April but preparation of this festival begins much early. People whitewash their houses and enjoy a holy dip at Haridwar, Tattapani near Shimla, Banganga near Kangra, Markanda near Bilaspur. During day time, the Baisakhi fair is organized at several places in a traditional way. Women’s participation in large number adds a special color to enhance the overall festive look.

Chet or Dholru is the first month of the lunar year and also the very first day of the month is celebrated with an idea to bring happiness and prosperity. This festival is known as Chatrali in Kullu and Dholru in the Bharmaur area of Chamba district. In area, Kangra, Hamirpur, and also Bilaspur, very first day of Chet month hold special importance.

Rakhi is another festival added to the list of festival celebrated in Himachal Pradesh. Rakhi is known as Rakhrunya in Mandi district, Salunnu in Sirmaur area, and also Rakhpunya in Shimla district. The festival is celebrated on the moon full in Shrawan when sisters put spiritual string around the wrist of their brothers and also look for defense and love in exchange. Brothers show their love by gifting some gifts and sweets to their beloved sisters.

Several cultural programs are organized at the Spring Festival. This festival is not just celebrated for entertainment purposes but it creates many business networking opportunities as well. During this festival, the people of the Lahaul district start to go back to their native place and the fair creates many opportunities for them to buy agricultural products and other useful tools for their journey and household.

Himachal Pradesh is known as the land of cultural diaspora. For the people of Himachal Pradesh, all days are full of celebration and joy but they become more energetic during the festivals time.