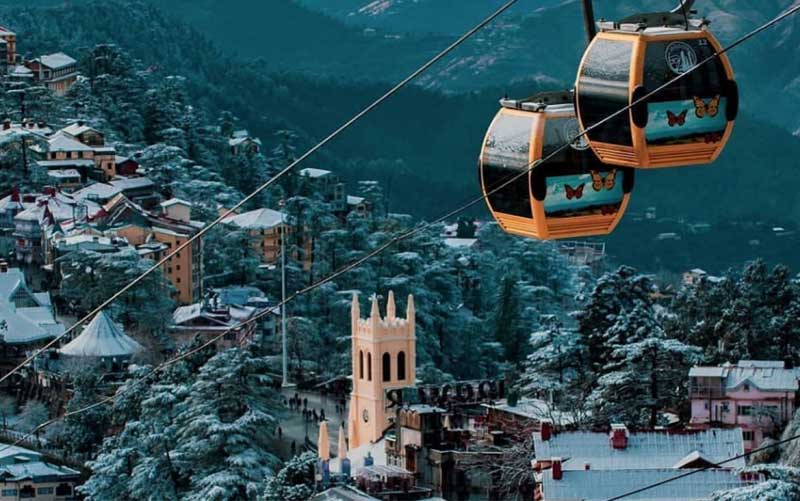 A lot of people want a holiday amidst the sprawling greenery in the lap of nature as it boasts serenity and offers solace to all the weary souls. Tucked away from the urban chaos, Shimla Manali Tour Packages from Lucknow would be one of the best trips for you. Hill stations are quite popular in India and are one of the favourite destinations for nature lovers. Himachal Pradesh is one of them.

The rich state offers alluring places to visit and makes sure that you have a nice time by boasting several adventure activities too in order to keep you engrossed throughout. If you are a newly-wed then you can also opt for the Shimla Manali Honeymoon Package from Lucknow.

Shimla, Kullu and Manali are one of the best options that you can opt for if you want to see something extraordinary. People come to these destinations every year and the visitors never get tired of coming here.

There are several places that you can visit in Shimla and Manali as they all lie in the same belt so it is quite easy to cover and avail the best Shimla Manali Tour Package from Lucknow. The places are

Along with the exploring the place, opting for the adventure activities are equally important when you are going for a vacation. When it comes to Shimla Manali Family Tour from Lucknow, you expect an unparalled travel journey from Lucknow to Shimla, Kullu and Manali. There are also some of the activities that you can enjoy.

HOTELS FOR YOUR SHIMLA MANALI TRIP FROM LUCKNOW

Without a shadow of a doubt, Manali and Shimla are one of the most visited places in Himachal Pradesh. Be it a honeymoon or a family vacation, these places will make it worth exploring. The elegant architecture with the high-end amenities makes it an ideal accommodation. There are some hotels in Manali, Shimla and Kullu that you must explore for larger-than-life experience.

How to Reach Shimla Manali from Lucknow

You can reach Shimla Manali from Lucknow by three modes of transport.

Since there are no direct flights from Lucknow to Manali, you will have to come to Delhi first and then board the direct flight to the destination. You can also board the flight from Chandigarh if not Delhi.

You will not be able to get the direct train from Lucknow to Manali. If you wish to travel via train then you have book a train ticket to Delhi or to Chandigarh Railway Station.

Yes, you heard that right! You can also visit the place by road but there is no direct road connectivity from Lucknow to Manali Shimla so you will either have to come to Delhi or to Chandigarh and from there, you can get a direct way to the destination.

After flying from Lucknow to Delhi, you will get down at IGI Airport in Delhi and our driver will pick you up from there. Then you will be transferred to Shimla which is the capital of Himachal Pradesh. The destination is quite famous for offering scintillating views and was one of the best summer places at the time of colonial rule in India.

Post having a healthy breakfast, you will leave for the excursion to Kufri. It is the quaint small hill station in Himachal Pradesh which is explored by a lot of people. One of the main reasons that it attracts the globetrotters is the Himalayan Wildlife Zoo which is a home of many rare species. You will also explore places like –

KUFRI – If you are visiting Shimla, do not forget to head to Kufri as it offers a plethora of adventure and water sports activities along with the lush greenery.

NALDHERA – Popularly known as 9-hole golf course, Naldhera is also one of the must-visit places nearby Shimla.

CHAIL – It is famous for the vast cricket ground and was also one of the main hubs of the Britishers at the time they ruled India. You will still see a lot of buildings made in the British styles.

SHOGHI – Well-known for its picturesque views, Shoghi is one of those places that offers solace and keep you away from urban chaos.

Note – After having a tiring day, you will be served some scrumptious meals and enjoy the rest of the evening relaxing.

After having the breakfast, you will head to Manali and checkout from the hotel in Shimla. You will also notice a lot of places while on the go to Manali. Manali is one of the biggest hubs that is having endless panoramic views and attracts a lot of people to stay in the lap of nature. Once you reach at the hotel, rest for some time and then you can take a look around the local market. And then have your dinner watching the majestic mountains.

Wake up to watch the beautiful views of the Rohtang Pass from your hotel and explore the tourist places here.

Best time to visit – May to October

Hadimba Temple – It is considered as one of the oldest temples in Himachal Pradesh and attracts a lot of visitors coming to Manali. The temple has been dedicated to the wife of Bhim.

Manu Temple – It is dedicated to the Lord Manu who is said to be the creator of earth. It is located around 3 km away from the main bazaar of Old Manali.

Vashisht Baths – It is considered one of the holiest water springs that is believed to have several medications and if you take a dip in the hot water spring then you will get rid of all the skin related problems.

After having a grand breakfast at the hotel in Manali, you will further head to Chandigarh and there are a lot of beautiful places that you are going to explore.

Vaishno Devi Temple – Vaishno Devi temple in Kullu is just created as the main one. It also attracts a lot of tourists every year.

Shimla – Popularly known as the Queen of the hills, Shimla is one of the places in Himachal Pradesh that was often visited by the English men during the colonial rule.

Note – After you will be transferred to your hotel, you can have the lavish dinner and stroll around the local market.

DAY 7: CHANDIGARH TO DELHI AIRPORT/RAILWAY STATION (5 HRS) TO RETURN BACK TO LUCKNOW

Have your morning breakfast and then you have to leave from the hotel in Chandigarh to return back to Lucknow with sweet memories.

How to reach Shimla Manali from Lucknow?

One of the best ways to reach Manali Shimla from Lucknow is through flight or a train. You have to first come to Delhi as from here there is a direct flight or train to the destination.

Why choose Shimla Manali for honeymoon?

Everyone loves hill stations and Himachal Pradesh is one of the best mountainous areas that most of the tourists want to explore. Shimla Manali also offers an array of cozy hotels for the newly-weds and is also a place where they can attain peace.

What are the best places to visit on a Shimla Manali trip from Lucknow?

Shimla and Manali lie in the state of Himachal Pradesh and is one of the most desirable places in India. There are a lot of places that one can explore –
1. Mall Road in Shimla
2. The Ridge in Shimla
3. Rohtang Pass in Manali
4. Hadimba Temple in Manali
5. Vashisth Baths in Manali

What is the best time to book a Shimla Manali tour package from Lucknow?