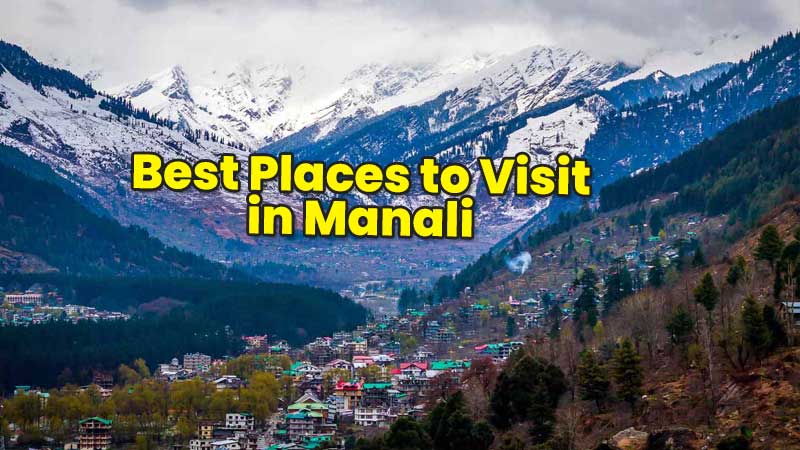 Planning a Manali Trip in April? Well, don’t worry about it; Honeymoon Bug has got you covered with one of the best packages. April is one of the coolest months to visit Manali and we would see a lot of people flocking here at this time. In this month, the destination offers pleasant weather to the globetrotters.

You would witness scenery at display of the landscapes like waterfalls and lush greenery in the region. Mountains covered with green meadows will take your hear away. Dotted with historical places and temples, Manali also showcases its unique side by offering tourists adventure activities during this month.

Besides, during your holiday, it is not just the beautiful places that make your vacations amazing, but also offers so many other things to do in April. We are up with a complete travel guide if you really want to know the places to visit in Manali during April.

Weather in Manali in April

April is when summers begun and sets the mountains green like forever! With the melting of snow and the growth of leaves and flowers comes in, April is the perfect month to visit here. During the month, the average high temperature ranges from 15 degree C and the lowest remains from 2 degree C to 6 degree C.

We have run down some of the best Tourist places in Manali in April that you can witness. And these below destinations will never disappoint you!

How about start your vacations with seeking blessings of one of the most worshipped goddess, Hidimba Devi? Sound’s great right! You can come here and include this temple in your itinerary as it is quiet popular. The temple is dedicated to Hidimba Devi who was the wife of great warrior Bhima from Mahabharata.

It is also said that this temples was constructed around 400 years ago. The architecture of the temple resonates the work done in the past and you would see a lot of stonework and craved wood work has been done which depicts the era of that time.

Nestled around 13 kms away from Manali, Solang Valley is yet another sought-after destination that you must put in your list. This valley is famous for boasting breath-taking views and is a paradise for adventure seekers and for the honeymooners. Solang Valley needs no introduction because there was a time when this destination was visited by millions of people every year. If you want to escape from urban chaos, then this destination is perfect for you!

Atal Bihari Vajpayee Institute of Mountaineering and Allied Sports is also nestled here and this institute offers winter skiing festival where there are classes and workshops for them.  Apart from this, you can also opt for trekking and hiking in the month of April in Solang Valley and also paragliding.

Ever wondered visiting Rohtang Pass? Well, make your dream come true of going there in the month of April. This destination is mostly visited by many travelers who have visited Ladakh. This place has gained a lot of popularity after the release of Bollywood movie ‘Yeh Jawani Hai Deewani’. Due to its high elevation of around 3978 meters above the sea level, Rohtang Pass offers jaw-dropping nature views to all the tourists.

Apart from this, you can also try your hands out in several activities like skiing, ice-skating and paragliding. Due to the uneasy roads because of snow, Rohtang Pass is only open from April to October for all the tourists.

The Great Himalayan National Park covers around seven hundred and fifty-four square kms. It is perched at an elevation of around fifteen hundred meters to six thousand meters.  Featuring four valleys namely Parvati Valley, Tirthan Valley, Sainj Valley and Jiwa Nal Valley, this destination is one of the most visited and popular as it boasts natural views.

Apart from other sightseeing, Manali also offers Tibetan monasteries that you must visit if you coming up here. Trip to Manali in April will offer blissful experience as you would see lush greenery everywhere and if you are someone who is a big-time fan of the same then you should head here. The popular monasteries are Gadhan Thekchhokling Gompa, Nyingmapa Gompa which attracts a lot of globetrotters here every single year. These monasteries offer a perfect epitome of Tibetan arts and architecture to the world.

Nestled on the Leh National Highway, Nehru Kund is yet another place that you can head to. The unique thing about this place is that it is named after the first Prime Minister of India and the water flowing here comes from Bhrigu Lake. Nehru Kund is nestled at a height of around 4,300 meters and considered as one of the top-notch places. It is also said that Nehru used to drink water from here whenever he used to stay here for some work or for vacations.

Kothi is a quaint village that is flanked by mountains and green meadows in Manali. This place en-routes Solang Valley which is around 16kms away from Manali. The rustic charm of the village will keep you hooked throughout your vacations and it draws the attention of many globetrotters who wants to escape from urban city noise. It is also considered as one of the most unexplored destinations in Manali. Kothi is also a photogenic place and a paradise for all the photographers who want to capture good pictures. Since, its located bottom of Rohtang Pass, you would see a lot of surreal views from far that will take away your heart!

In proximity to Manali, Naggar Village is one of the beautiful villages that is not yet explored by many people. Nestled on the left bank of River Beas, the destination is around 19kms away from the city centre. It boasts mesmerizing views that will make your heart skip a beat and the main highlight of this place is the Nicholas Roerich Art Gallery where the paintings of great Himalayas have been displayed. Not only vacationers, but this place also attracts a lot of devotees as it boasts great temples like Tripura Sundari and Gauri Shankar.

Arjuna Cave is nestled near Prini Village where Arjuna meditated for several years back in ancient times. It is considered one of the best places to know about the past so if you a history buff then you can surely visit here. This cave is in great proximity to nearby temples and holds a lot of significance in the history of ancient times. Located near to Manali, Arjuna Cave is said to be one of the best picnic spots for locals and offers some amazing scintillating views surrounded by the hills.

Chandrakhani Pass is said to be one of the most appealing places in Manali in April as it attracts a lot of trekkers. The destination offers a lot of treks and is a paradise for them. If you are someone who is looking for some amazing place to be then this is something you should keep in your list. The trek routes are full of lush greenery and it takes you close to the culture as well as you get to interact with the locals.

So, what are you waiting for? Make the most of your honeymoon vacations amazing with these top Best Places to visit in Manali in April and enjoy to the core.

FAQs About Best Places to Visit in Manali in April 2023

Is it a good time to visit Manali in April?

Yes, absolutely, you can visit Manali in the month of April as it boasts some charming views and take you close to nature.

Which are the best holiday places in April in Manali?

If you are planning to head someone in April then nothing would be better than surrounded by the mountains in Manali. There are plenty of places where you can quench your thirst for wanderlust like Solang Valley, Kullu, Naggar Village, Arjuna cave among others.

Can I see snow in Manali in April?

If you are heading to Manali then there is less chance that you can witness snow as in April, the temperature rises and become pleasant. If you want to see snowfall then you can visit in between November to January.

Is Manali crowded in April?

Manali is such a place where you will find a lot of people every season no matter what it is. Because Manali is a beautiful destination.

What should I wear in Manali in April?

If you are visiting Manali in April then you can wear something light and comfortable in which you can walk around and enjoy the sightseeing to the fullest.

What are the best activities to do in Manali in April?

Manali is a pretty place that does not only let you witness the amazing views but also offers best activities to make your vacations memorable. It boasts trekking, camping, paragliding, zorbing among others.

Is Rohtang Pass open in april?

Yes, Rohtang Pass opens up in the mid or at the end of April for tourists because before that there is a high risk of going there as it would be all snow over there.

Is paragliding Open in Manali in April?

If you are an adventure junkie then you must head to Manali for some ever-lasting fun. You can enjoy paragliding if you hit here in the month of April as Manali offers the same.