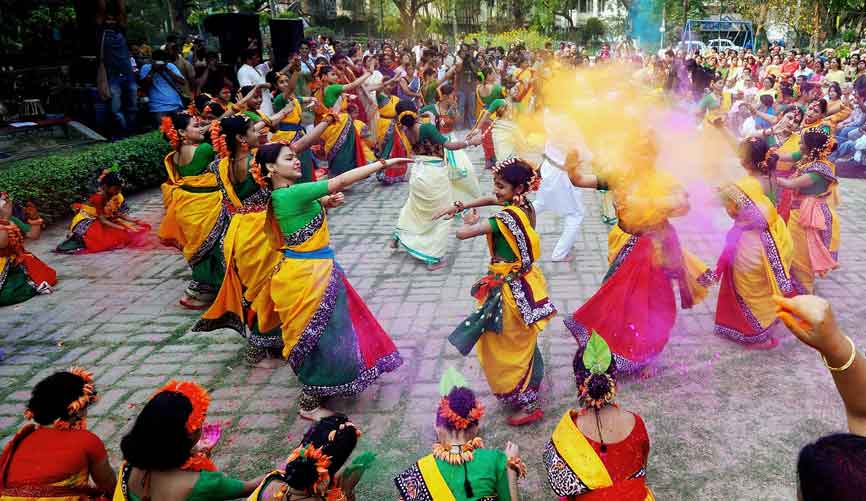 All of us travel lovers love some different kind of travel experience either with their friends or with their sweetheart, and March has been the month of Holi in India, since many ages. So, if you’re planning to delve into the “Festival of Colours” – Holi during your India tour package exploration, you won’t feel disappointed.

Holi in India is celebrated with full enthusiasm. From traditional temple rituals to modern parties with DJs, Bhang, and plenty of colors, most of the regions in India celebrate the festival of Holi in a unique style.

WHY IS HOLI CELEBRATED WITH FULL ENTHUSIASM IN INDIA?

Holi is celebrated in the name of good harvest and fertility of the land and holds a strong significance in the HINDU MYTHOLOGY. The festival of colors is widely popular because, according to the Hindu Mythology, the lord – Krishna was jealous of Radha’s fair complexion, and he threw colors on her to even the score. In short, the festival marks the immortal love between Lord Krishna and Radha.

Also, the festival marks the victory of good over evil because it is widely celebrated in India’s famous tourist attractions just to celebrate the killing of Holika, the sister of Hiranyakashipu.

Backed by so many stories, one cannot depict which place in India is best to celebrate Holi because the colorful celebration entirely depends upon what kind of experience you are seeking!

To convince you that Holi is the must attending the festival in India on your tour package to India, we have mapped down 10 best places to celebrate Holi in India in 2022: Take a look, and thank us later!

Imagine celebrating Holi in the birthplace of Krishna and his beloved Radha because Barsana and Nandgaon are the birthplaces of these two lovers. The holi is profoundly celebrated there with full passion where the ladies or women from Barsana vanquish the men from Nandgaon because men came to tease the women.

It’s a playful tradition at Barsana and Nandgaon where women chase the men with sticks in their hand, and hence, this unique celebration is titled “Lathmar Holi.” On the first day, men from Lord Krishna’s village go to Nandgaon, the village of Radha, and on the second-day celebration, vice versa.

Where the celebration takes place – Holi is celebrated with full passion at Barsana at the Ladli Ji Temple, and you too can visit this place with your BAE if you’re residing near the NCR Region.

Do you know that the Holi celebration in India is a great experience for those to visit Mathura and Vrindavan on their Holi getaway? Braj is the region where Lord Krishna and Radha spend their childhood days around Mathura and Vrindavan. With two types of holi played there, one lures tourists and locals with the throwing the baskets full of flowers along with chanting the loud divine mantra – RADHE RADHE.

In contrast, the second type of Holi is known as the Raas Leela, where locals dramatize Krishna’s courtship with the Radha. Remember that Mathura is the best place to celebrate Holi in India as it engaged itself in the Holi jollification around one month before the main Holi strikes.

Where the celebration takes place – Head to Dwarkadheesh Temple in Mathura, where the temple doors open up for the tourists and locals. On the other hand, you can delve into the colors of Holi in Vrindavan at the Banke-Bihari Temple.

You think West Bengal is only restricted to the Durga Puja? If yes, then you are at the constant flux and need to revise your knowledge, because, in Shantiniketan, the festival of Holi is celebrated with full jolliness in the name of “Basanta Utsav or Spring Festival.” This trendiest celebration was initiated by the famous Bengali Poet and Nobel – Rabindranath Tagore”. It’s a massive celebration where locals and tourists gather at the Vishva Bharati University (which was his university).

Students of Vishva Bharati University during the Basant Utsav get dressed up in unique attire and organize a glorious cultural and musical program to entertain the locals and the guests. You can shake your legs to the enchanting music of Tagore’s poem. This celebration holds an important space in the Bengali history and culture, and you should defo witness this kind of celebration if you want to celebrate the festival of colors on your India tour package.

Take part in the unique three days Basant Utsav Folk Festival and head to the Purulia district of West Bengal. From singing and playing Holi with the locals and with other tourists to enjoying a wide type of distinct folk art, the Folk Holi celebration in Purulia in West Bengal lets you dance on the rhythm of the fascinating Chhau Dance, Darbari Jhumr, Nashua Dance. The villagers organize this massive celebration to sustain them.

TIP – You have to drive approximately 5 to 6 hours by train from Kolkata, or hire the private taxi to reach Purulia. There you’ll find the camps, cottages, and portable toilets as well.

With a total of three types of holi celebration in Kumaoni – Baithaki (sitting), Khadi Holi (standing), and Mahila Holi, you can’t go wrong for the holi celebration in the Kumaon region of India. Such is the charm of Holi gathering that the celebrations begin from the month of Paush or winters.

Kumaon is rich in culture, natural beauty and is amongst one of the top places to celebrate Holi in India. Head to the Kumaon region if you want to soak yourself in the ambiance of unique colors and dance to the music of the local Kumaoni song.

The Baithaki Holi, you can witness the local devotees sing classical rangas to appease Lord Krishna. The Mahila Holi is nowhere different in terms of celebration then the former one, and it only differs because it’s a gathering of the women. While the Khadi Holi is all about the gathering of the townspeople who all wore a white shirt, called Kurta, trousers called churidars, and a cap called Gandhi cap.

“Saddi Delhi” usually gets Rowdy during March as it’s the celebration of Holi in Delhi too! Make your reservations and book your space at the electrifying Holi Moo Festival, which is titled as the best gathering reason in March for the Delhizens during the Holi celebration. The festival bills itself with the independent music acts where you can bask yourself in the vibrant Holi festival.

Did we mention that the whole environment is safe and tourists play the holi with the non-toxic colors? Sip the bhang lassi, gorge on the lip-smacking street food, and dance your heart out.

Considered to be the fun-frolic gathering that dates back to 1701, Hol Mohalla was organized by the Sikh Guru Gobind Singh to add different charm in the holi festival. You would be amazed that Hola is a masculine name of feminine holi, which takes place just right the next day of the Holi.

Fun Fact. – Colors are not thrown on each other, instead, Hola Mohalla depicts the demonstrating martial skills in simulated battles. It’s a three-day festival where weapons, mock battles are displayed. Indulge in the divine and spiritual Kirtan ceremony along with poetry competitions too!

Rajasthan is truly a gem place to celebrate Holi in India because every year, the festival of Holi marks the massive parade in which decorated elephants, camels, horses set the royal Holi ambiance. You can witness the folk dancing on the streets during the March in and around Holi in Jaipur and Rajasthan.

You may not spot the elephants due to responsible tourism in Rajasthan, but the cultural program would surely soothe your holi vacations in Jaipur and Udaipur. Both the places Jaipur and Udaipur celebrate holi in Royal style. The best you could do during your Holi vacations is to stay at the camps and enjoy the bonfire a day before the Holi.

Where to celebrate Holi – Watch the burning of Holika at the renowned Jagdish Temple in Udaipur.

Goa is lined with festivals and always has on the top of the tourist radar for its vibrant festivals like SunBurn and other music festivals. The same goes for Holi celebrations in Goa. Goa gets dressed in the new avatar during March because holi in Goa is all about flabbergasted gatherings as Shigmostav, a 14 days festival which marks the celebration in the name of the warriors who left their families to fight with invaders during Dussehra. Take part in Holi parades in Goa too!

Where the celebration takes place – Panjim, Vasco, Margao, also, the pristine Goan beaches get colorful with people gatherings, they all play with colors.

The only place which is undiscovered by the Indian locals but is fondly considered the best place to celebrate Holi in India is Hampi. Located in Karnataka, Hampi organizes the holi celebration for two days! Here people gather on the streets with full pride and enthusiasm and play safe Holi without harming each other with the chemical colors and other stuff. Hampi is one of the topmost faces of South India Tourism, and traveling to South India is safe for the locals as well as international tourists.

No matter which part of India you visit to celebrate Holi in 2022, be it North India and South India, the charm of Holi is the same in India because India is a diverse country with vibrancy at each of its corners and nooks.

Now, you can’t hide from us – we know you have been thinking about which place is super affordable to celebrate Holi in India in 2022? And why wouldn’t you? The listed Holi attractions for tourists in India are diverse, exotic, heart-stealing, they’re raw, and they are unique in their appeal.

Allow Honeymoon Bug to demonstrate how to explore India on budget during the month of Holi.