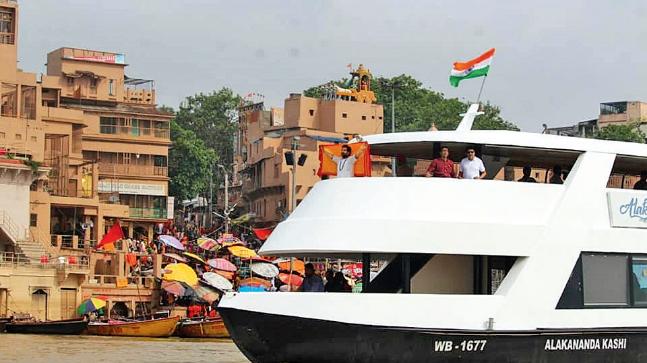 You know Varanasi as one of the holiest cities in India, land of temples, the city of Lord Shiva, and yes, it is the constituency of Honourable Prime Minister Narendra Modi. But apart from its appealing spiritual ghats, the city of temples is now emerging on the tourist radar for different reasons. In short, people are choosing the ghats of Varanasi for the luxury cruise instead of getting involved in a colorful mix of contemporary cafes and pure veg dhabas. No doubt that Varanasi is equally enthralling to visit like Jaipur and Agra, but the way this Hindu Spiritual Destination is making domestic, as well as frequent international travelers visit again and again is a topic of discussion.

Let’s find out more information why admiring the sheer enigma of Varanasi Ghats through a luxury cruise is a great idea. Here is everything you should know about the most delightful way to taste the spiritual aura of Varanasi.

The five-star luxury cruise “Alaknanda” was started in September 2018 by the honorable Chief Minister of Uttar Pradesh Aditya Nath Yogi. He was the first Person to take the sail between Assi Ghat and Panchganga Ghat. It was inaugurated in September, just when lots of international tourist flock to Varanasi to witness the great gathering of Janmasthami – the birth of Lord Krishna.

With 60 – seater vessel, a stylish modern kitchen on the upper deck, the liner named Alaknanda is a double-decker ship supervised by the Nordic Cruises. It has air-conditioned seating places in its lower level with glass windows, from where you can stretch your eyes out to enjoy the panoramic views of the pious ghats. The upper deck of the Alaknanda Cruise is equipped with an air-conditioned restaurant, where you can feed your tastebuds with specially curated dishes with a glass of liquor.

This five-star luxury Varanasi river cruise can accommodate upto 100 passengers together in its lower deck, and while the upper deck restaurant can house around 24 passengers at a time. If you want to taste the spirituality from the different perspective rather than wandering around the ghats of Ganges, ride the Alaknanda Cruise Ride at the Ghats Of Varanasi.

What To Expect From Alaknanda River Cruise Ride?

Experiences are myriad at the Alaknanda River Cruise, right from the sitting arrangement which includes a comfortable luxury defining sofas, from where admiring the outside Aarti and gazing at the gorgeous sunset/sunrise is one of the best things to do in Alaknanda Cruise.

Equipped with the legit advanced navigation system with onboard GPS, the concerned authorities in Varanasi has taken all the adequate steps to make sure the tourists sailing on the Alaknanda River Cruise remains safe inside the cruise. Wondering how? Tourists riding the Alaknanda cruise have to wear safety jackets, and the presence of lifeguards on the cruise makes it safer to ride. Even lifeboats are also present, so there comes no chance of safety issues if you intend to take this promising river cruise.

From Where To Take Varanasi  River Cruise?

The Varanasi River Cruise starts from Assi Ghat where morning Aarti rituals are performed and continue its way to Panchganga Ghat. Throughout the exploration, the ride covers over 12 km distance.

Boarding Point For This Luxury Cruise

With two boarding points, Alaknanda Jetty and Ravidas Park Ghat Nagwa, you are free to board the Alaknanda Cruise as per your interests.

What Is The Cost Of The Varanasi River Cruise Tickets?

Expect to pay a shoestring INR 750 Per Person to ride the Alaknanda Cruise.

What Is The Best Part?

The company under which the Alaknanda Cruise is supervised has announced that the ship could be booked with INR 75,000 for private functions and corporate gatherings.