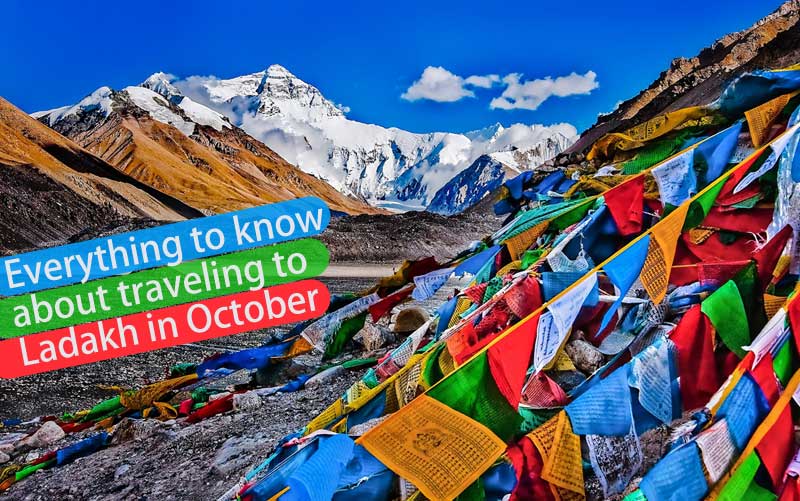 Natural beauty in its full swing is what Ladakh has to offer the visitors. It has been identified as a Union Territory by the Indian Government that lies ahead of Jammu and Kashmir. Tourism in Ladakh has always witnessed tremendous growth as people head to the place to experience blissful vacations as a part of the Ladakh holiday package. Right from rugged terrains to picturesque valleys, stunning lakes, and cultural activities, Ladakh has everything for everyone. Though it remains closed from November to April because of heavy snowfall, people can plan a trip in October (winter season) as it is the best time to visit Ladakh.

Ladakh is stated as the land of high mountains passing with exceptional beauty scattered everywhere. It lies at the height of 3500 meters above sea level and has been referred to as India’s little Tibet. The reason behind this is its proximity to Tibet and strong links as well. So, if you have booked the Leh Ladakh tour package for October month; then, you will get a chance to witness a great amount of snowfall. Be ready with your heavy woolens and ensure safety on the high altitudes. Besides this, you should acclimatize yourself by drinking plenty of liquids like juice, soup, or tea for better energy. The majestic hills of Ladakh are such that anyone would fall in love with the place without a doubt.

If you have taken a Leh Ladakh package for October; then, it is necessary to understand that the weather would be very cold. In this season, you can either access Ladakh from Srinagar Route or Manali Route. Depending on your need, it is advisable to make a booking before-hand as many areas, and tourism businesses are on the verge of wrapping-up because of harsh approaching winters. This does not mean that you will not be able to enjoy Ladakh at all. Rather, there are many options available in October month too. Generally, Ladakh starts receiving snowfall in September itself. So, in October, you will be witnessing plenty of fresh snow around.

The traveling time taken from Srinagar to Ladakh is about 10 hours, which will enable you to pass through Ganderbal, Chapper Gund, Kangan, Sonmarg, Baltal, Dras, Kaksar, Kargil, Khangral, Takmachik, Saspul, Nimmo, and Leh districts. You can book private taxis well in advance with travel agents in Srinagar. The taxi fare is approximately 20000 Indian rupees; though, the fare may differ as per the taxi hired.

On the other hand, Ladakh is accessible from Manali too. In fact, you should travel from here in the first week of October as the roads are safer. Beyond the second week, excessive snow and high-altitude drives can create issues in traveling easily. You can book private taxis from Manali to Ladakh that will pass through Barwa, Sissu, Tandi, Keylong, Jispa, Darcha, Baralacha Pass, Killing Sarai, Sarchu, Pang, Rumtse, Upsi, Karu, Thiksey, Shey Palace, and Leh. The total traveling time taken is around 12 hours.

Leh-Ladakh is accessible from Srinagar by bus as well. The journey by bus will take around two days to reach. Initially, the bus starts from Srinagar and halts overnight in Kargil. Further, the driver starts early in the next morning and reaches Leh around the afternoon. Its fare per person is 925 rupees for a semi-deluxe bus and 1320 rupees for a deluxe bus. The Leh-Ladakh government has made a rule that you have to hire a taxi or other accessible transport from Leh to reach Ladakh. This decision was made for the benefit of local tourism operators.

You can also take the bus from Manali to Leh-Ladakh. The bus will halt overnight at Keylong and start for Leh again the next morning. Of course, the meal and accommodation are included in the bus fare, which is charged 2900 Indian rupees for a single person. You can drive on your own as well. But, make sure to keep the fuel tanks full from wherever possible as the route has very few petrol stations on the way.

Places to Visit in Leh-Ladakh in October:

In October, the tourists coming to Leh-Ladakh as a part of the Leh Ladakh tour package have various options to enjoy their vacation. Besides playing in the snow and experiencing the sheer white beauty of the place, you can visit Nubra Valley, Tso Moriri, Kargil, and Zanskar Valley.

Certainly, Nubra Valley remains open for tourists in October that can be accessed by Khardungla Pass. The journey will be an experience of traveling to Nubra via road can be extremely enjoyable with snow present everywhere. Of course, you will come across thick walls of snow. Touch the snow and feel the chill on route to Nubra Valley. You can also visit some local villages like Diskit, Sumur, Hunder, and Panamik to see the cultural values in the Leh area.

The majestic Pangong Lake is easily accessible by road; though, you may face temporary blockage because of snowfall at Chag La. The authorities are quick to clear the snow, and you can resume the journey to Pangong Lake. The best part of traveling to Pangong Lake in October is that the camps start to wrap-up, and you will find very few tourists. It is because of this that accommodation at the campsites is much cheaper.

Definitely, Tso Moriri is accessible by tourists in October via Chumathang. On the way, you will experience the majestic views of snow everywhere. An overnight staying option is available at Tso Moriri for tourists. You can check in at various guesthouses and homestays in the area.

The region of Kargil is the one that has witnessed a lot of war situations between India and Pakistan. Still, this place is safe for tourists to travel in October. You can visit Gurudwara Patthar Sahib, Magnetic Hills, Lamayuru Monastery, Mulbekh, and Kargil War Memorial.

There are chances that Zanskar Valley might be accessible in October; but, only in the first week of October as it gets tricky to travel. The reason behind this has been extensive snowfall and resulting road blockages.

Yes, most certainly, the famous bike trip can be taken from Srinagar to Leh-Ladakh in October. In this matter, you should take care of returning from the same way and not the Manali route. It is because of heavy snowfall, there are chances that you may face road blockages and slippery turns. This may turn out to be risky for you. Another thing to check out is that you should wear heavy woolens, a leather jacket, gloves, and woolen caps to stay safe from harsh winter winds blowing on the way to Leh and Ladakh.

The Ladakh holiday package for October unveils that you can enjoy a spectacular and colorful celebration of life in the form of the Diskit Gustor Festival. It takes place in the Diskit Monastery of Nubra Valley. This festival is attended by thousands of people who enjoy the exotic cultural magnificence of Leh and Ladakh’s people. You can experience the vivacity resting in the enthralling valleys of Leh and Ladakh for sure.

Adventure Activities around Leh-Ladakh in October:

Though October brings chilly cold weather with snow all around, the adventurous souls can still get some of the most thrilling experiences in Leh-Ladakh’s adventure activities. You can enjoy river rafting in the cold waters of the Zanskar River. But, it is necessary to make the bookings well in advance. Apart from rafting, Ladakh is considered to be the home to various trekking options. This includes Sham Valley Trek, Markha Valley Trek, Lamayuru Trek, Phuktal Monastery Trek. Depending on your needs, you can access the respective places’ trekking associations and make bookings to measure the heights.

What to Carry on Your Leh-Ladakh Trip in October:

As you know, October month witnesses heavy snowfall in Leh-Ladakh; it is important to carry heavy woolens. Besides this, it is necessary to carry medicines related to high altitude sickness. This one is necessary for people who experience nausea and vomiting at the time of travel. The Ladakh tour package also includes information about the reduced oxygen levels in higher areas. So, the people suffering from Asthma and other breathing problems should avoid traveling to high regions in Leh-Ladakh. Not to forget that you must carry high boots or comfortable shoes to enjoy walking over the rugged terrains.