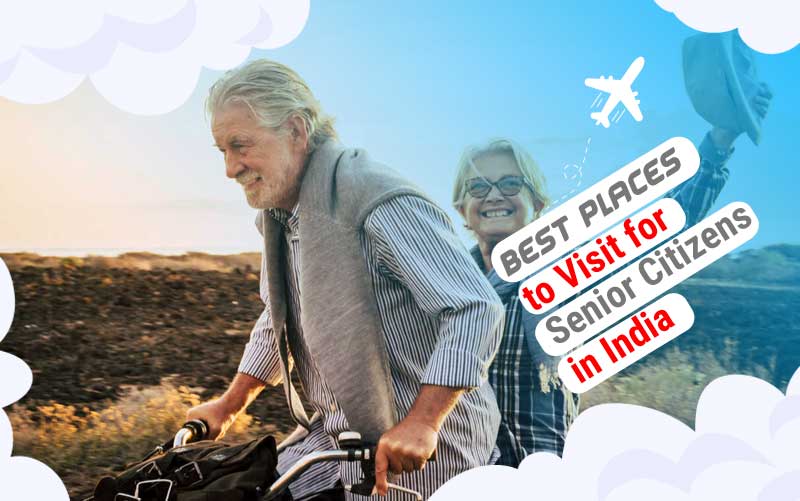 Spending life after 60 becomes a big task for every oldie as life gets too hard with growing health issues. But, instead of making your life hard, you can fill it with some excitement by traveling. Travel seems a difficult task in old age but actually, travel gives you the best memories out of your life that you can collect with your dears at any age. So, remove all the tensions of your life and get unwind with the fresh air of India by visiting some sought-after destinations in India. Here, we have come up with a handy list of the Best Places to visit in India for Senior citizens to turn their monotonous life into interesting.

Have a wonderful experience of a good spectrum of India’s diverse panoramas through the Golden Triangle tour that covers the best places to visit for senior citizen. Golden Triangle of India is the journey between Delhi, Agra, and Jaipur which makes an almost-equilateral triangle while plotting these three cities on a map. The Golden Triangle route is around 720 km by road and each part is around 4 to 6 hours of drive. The popular Shatabdi express train also connects the route of Delhi with Agra and Jaipur.

Pensioners can enjoy the bizarre soul-stirring times, vigorous colors, natural beauty, and intact royalty by this triangle tour that also covers the other marvelous spectacles of Rajasthan along with Delhi and NCR, Agra, and Jaipur. Your tour starts with the capital of India, Delhi which is popular for serpentine streets and lively ambiance. Here, pensioners can visit monuments and walk through the busy streets of Chandni Chowk.

Then you will be driven to Agra where retiree can admire the beauty of Taj Mahal – The Seventh Wonder of The World also called The City of Love. After that, you will be visited Jaipur also known as Pink city because most of the buildings are painted with Pink Color. Here, explore the history and visit the popular UNESCO world heritage site Jantar Mantar.

Pensioners must visit one of the Best Vacation Spots for Senior Citizens in India, Kerala to enjoy a favorable and pleasant climate all year round. Kerala is famous for its lush green hills, spectacular backwaters, gritty beaches, Ayurvedic tourism, and tea plantations. The state is located on the sultry Malabar Coast of southwestern India. Being the best tourist destination of India, it offers magnificent backwaters, sandy beaches, picturesque hill stations to all the tourists who come to visit here from all over the world. Oldie people can visit its major attraction such as Kochi – Munnar – Thekkady – Alleppey.

Munnar – By having a favorable climate throughout the year, Munnar attracts a number of tourists every year. Moreover, you can visit tea fields in Munnar. Retirees can watch the Neelakurinji Bloom and try diverse Tea Flavors in Munnar.

Kochi – known as the Queen of the Arabian Sea. You will get a visual treat with its group of islands which comprise Willingdon Island, Fort Kochi, Mattancherry, etc. Pensioners can explore Fort Kochi on foot or on a bicycle. Moreover, they can witness Theyyam in Kochi.

Thekkady – situated near to Kerala-Tamil Nadu border. It is home to many animal species and is praised for its semi-evergreen, moist deciduous forests, dense evergreen, and savanna grasslands. Retirees can enjoy a Spice Tour and a Jeep Ride in Periyar Wildlife Sanctuary here.

Make a Pilgrimage Tour to Uttar Pradesh which is one of the best holiday destinations for senior citizens in India, known for its rich culture and tradition. Situated in UP (Uttar Pradesh), Ayodhya and Mathura considered the birthplace of Lord Rama, Lord Krishna, and Bhagwan Parshuram respectively. If a retiree wants to deeply explore the rich culture and tradition of India so Uttar Pradesh is the best place to visit. Here, pensioners can visit places like Varanasi, Prayagraj, Ayodhya, Mathura, Vrindavan.

Varanasi – the most sacred sites in India as it is home of Lord Shiva), Sarnath (A small village is located 13 kilometers northeast of Varanasi, in Uttar Pradesh, India. Here, Gautama Buddha first enlightened Dharma and addressed his first sermon. Also, Buddhist Sangha was developed.

Ayodhya – popular for its historical and mythological stories, beautiful temples, legends surrounding the Hindu epic Ramayana and Vishnu, and much more.

Chitrakoot – a place of religious, cultural, historical, and archaeological importance, located in the Bundelkhand region.

Mathura – it is the birthplace of Lord Krishna and widely famous for its ancient culture and tradition.

Vrindavan – popular for the various Lord Krishna temples, the and joyful festive environment.

Have a wonderful holy tour to “Land of the Gods,” Uttrakhand to get some positive vibes in a pleasant and amicable environment amid the scenic Himalayas. It is also referred to as “Devabhumi” as you can find here various pilgrimage centers and Hindu temples all over the state. Let’s talk about the most popular destinations to visit in Uttrakhand for Senior citizens.

Haridwar – highly known as a holy place for Hindus that conduct major religious events such as Kumbha Mela. Here, you can visit various temples for worship.

Rishikesh – highly known for several Yoga Ashramas where you can do meditation. You can start Char Dham Yatra from Rishikesh (Gangotri, Yamunotri, Kedarnath, Badrinath).

Visit India’s most visited pilgrimage places and Senior Citizen friendly Holiday Destinations to visit in India in Southern India such as Balaji Temple at Tirupati in Andhra Pradesh, the Buddhist place of Nagarjunakonda, wonderful Islamic structures of the Qutub Shahi and Asaf Jahi dynasties at Golconda Fort, and Hyderabad. Let’s talk about the beauty of South India’s major attractions.

Rameshwaram – it is a temple one of the top religious places in India that comes in twelve Jyotirlingas (lingam of light) of Lord Shiva.

Kanyakumari – popular as a Hindu pilgrim center where you can enjoy stunning views of sunrise and sunset over the meeting point of three oceans-the Bay of Bengal, the Arabian Sea, and the Indian Ocean.

Madurai – an important industrial and educational hub famous for historical monuments such as Meenakshi Temple and the Tirumalai Nayak Palace.

Northeastern State comprises of Seven Sister States (Arunachal Pradesh, Assam, Manipur, Meghalaya, Mizoram, Nagaland, Tripura, and Sikkim.) that are interdependent on one another and connected to India through Siliguri Corridor. Northeast India represents a geographic and political-administrative division of the nation. There are two most popular destinations to visit in Northeastern for senior citizens – Gangtok & Darjeeling.

Darjeeling is famous for its tea plantation, the magnificent panorama of the Kanchenjunga area of mountains, richness in cultural & natural heritage, and the popular toy train, declared as a UN heritage. And, Gangtok is popular as a Buddhist pilgrimage site following the formation of the Enchey Monastery. So, visit and enjoy!

Odisha is one of the best tourist destinations for senior citizens which is highly popular for heritage sites and sumptuous views. Pensioners can enjoy their moments at beautiful beaches and pilgrimage sites in Odisha. Besides, you can relish the Puri Beach Festival and the Jagannath Rath Yatra that draws a number of travelers every year. Let’s talk about its major attractions Bhubaneswar, Puri, and Konark.

Bhubaneswar – It is referred to as the capital city of Odisha and ‘City of Temples’ that is famous for its ancient rich heritage and historic monumental temples.

Puri – consider as the final resting spot of Lord Vishnu. This city is highly popular as the most pious pilgrimage destination for Hindus. You can worship in the most prominent Jagannath temple.

Konark – Konark Sun Temple is a UNESCO World Heritage site that is popular for its unique architecture.

Himachal Pradesh is one of the magnificent hill states to visit which is popular as the “Land of the Gods.” It is located on the bank of River Beas in Northern India. Himachal possesses much more than just sumptuous beauty. It is home to the biggest glacier in Asia named the Shigri Glacier which is placed in the Lahaul – Spiti region and serves the Chenab River. The state is known for its stunning landscapes and adventure activities like treks, paragliding, skiing and so much more.

All age groups people, young friends, honeymooners, families, and adventurers can enjoy their holiday at this ideal destination. oldies must visit the two most popular destinations of this state, Shimla, and Manali to create memories and enjoy their time at old age. The Manali – Leh National Highway is the highest motorable road in the world that will give you an incredible experience. Besides, relish the cool and pleasant environment of Shimla during summers.

Get ready to enjoy your life at 60 with amazing holiday tour packages of India with your dears. Have a blissful journey!