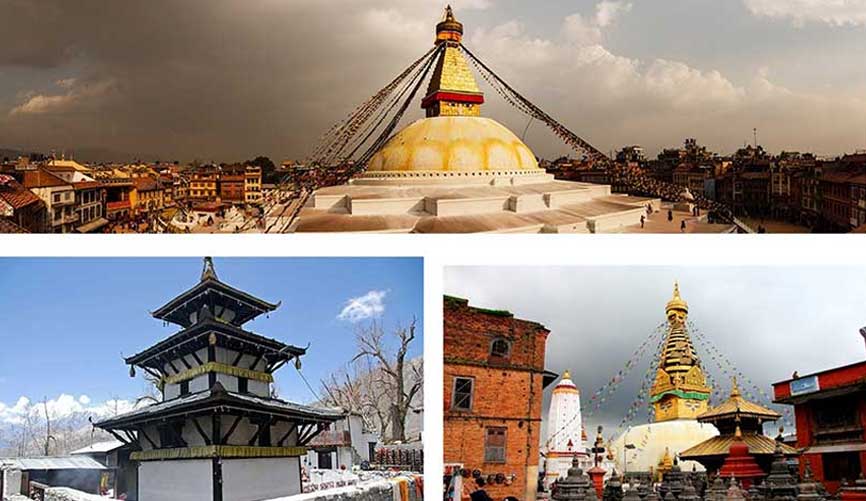 Nepal, which is not only famous for the adventure and boasting natural views but also known as cultural melting pot and is a mix amalgamation of two religions – Hindus and Buddhism. The destination is one of the popular that also tells us the story of ancient times and considered the holiest places for Indians. Undoubtedly, Nepal is amongst the top-rated location that boasts pilgrimage places.

Tourism in Nepal is another way to keep up the economy growing as every year lot of visitors come here for leisure travelling. If you anytime visit here, you will not be astonished with the fact that the local people go to the shrines on daily basis and are into prayers and rituals. So, we would like to run down some of the important pilgrimage places in Nepal if you are a spiritual soul.

Built in 5th century, Pashupatinath Temple is devoted to Lord Shiva which is said to be one of the holy places in Nepal. A lot of people who are devotee of Lord Shiva turn up here to seek blessings from him. A quite far away from Kathmandu, the temple is considered most sacred for Hindus and comes under UNESCO World’s heritage sites. Your soul will purify after paying a visit and feels like out-of-the-world experience for all the tourists.

The name Manakamana is derived from Mana means ‘heart’ and Kamana means ‘wish’. It is to be believed that the person who comes here gets his/her wish fulfilled. About 12 km away from the capital of Nepal Kathmandu, the temple attracts thousands of Hindus to make a wish. The temple is nestled at a height of 3900 ft above the sea level.

Janakpur, which is also known as Janakdham is one of the best pilgrimage destinations in Nepal. Popular for the birth place of Goddess Sita, the location was founded in the early of 18tyh century. It carries a lot of importance for the Hindu people and is one of the known religious places in Nepal. Located in the district of Terai, Janakpurdham is the third largest city in the region that also let you know the tales of ancient history. The city is also gradually developing fast with the passage of time.

Perched at an attitude of 3,710 metres, Muktinath Temple is situated in Mustang district and it is believed that it is the one thing through which liberation from the cycle of birth and rebirth is found. You can reach the temple by opting Trekking or driving if you want to explore your adventure side. On the sunny days, you can also witness the mesmerizing views of large landscape as it is nestled at very high. So, make sure you visit the temple to seek blessing and for the awe-inspiring views.

Famous for its historic significance, Changu Narayan Temple is located on the hill-top and is surrounded by a small village called Champo. The temple is mainly made the Nepali art keeping in mind known as Pagoda which was developed back in 5th and 6th century. The temple was come existed even before in 325 A.D and is one of the oldest and important parts of the past. Moreover, one of the reasons that tourists flock here is its authenticity and because it is one of the holy places in Nepal.

Just about 3 kilometres away from the capital Kathmandu, Swayambhunath which is also popular as Monkey Temple is resting overlooking the steep valley in Nepal. A lot of Monkey’s also keeps on wandering and the temple offers some scenic trails of the city. According to the local people of the country, this location has created a faith and harmony among the citizens from centuries and considered as most religious place in Nepal. Hands down, this temple should be in your list to visit.

Resting on the hill-top of Chandragiri, Bhaleshwor Temple is popular religious destination in Nepal. According to the ancient past, the Satidevi’s forehead was fallen here and Shiva was wandering carrying her body on his shoulder. The people here also believe that who-so-ever come here to seek blessing of the Lord Shiva, the devotee doesn’t go empty handed. The temple will also let you experience some amazing breath-taking vistas.

Lumbini is well-known as Gautam Buddha was born here in 623 B.C. A t present, the place has gained an immense importance in terms of spirituality as it has been visited by many tourists every year. The thing that makes Lumbini an ideal pilgrimage places to visit in Nepal is its 25 internationally built Buddhist monasteries. One can also witness the real birthplace which is inside the Mayadevi temple premises. There are also some inscriptions of Ashoka Pillar that depicts Lumbini as his birthplace.

Tucked away from hustle-bustle from the urban chaos, Pathibhara Temple in Tapeljung district in Nepal is one such place that boasts lush greenery and snow-clad mountains. Perched at a height of 3,794 meters, you can also opt for trek to reach the temple and trail is not rough so if you just a beginner then you can go for it. To make the rout bit easier for the elderly people, the government of Nepal has also started off the project of the cable car to the temple is undergoing process and it is expected to finish it in the coming of few years.

Representing the beautiful downtown Kathmandu which is about 8 kilometers, Boudhanath Stupa is easily accessible from the Tribhuvan International Airport. For both Hindus and Buddhist, it is one of the sacred sites in Nepal which is said to be the biggest Stupas in the world and was constructed back in the 14thy century. Flanked by the Tibetan market and handicrafts, scrumptious food, the place will uplift your mood. If you are planning to visit the Boudhanath Stupa then you must make a visit at the auspicious time of Kora and to spin the brass prayers while making a wish.

Without a shadow of a doubt, there are a plenty of pilgrimage places in Nepal that you can explore and get your hands on some adventure activities as the location also offers ample of experience to make it even more memorable for you with your loved ones. So, if you are planning to visit the country anytime soon then you do take a second thought, pack your bags and leave for the mesmerizing place already!