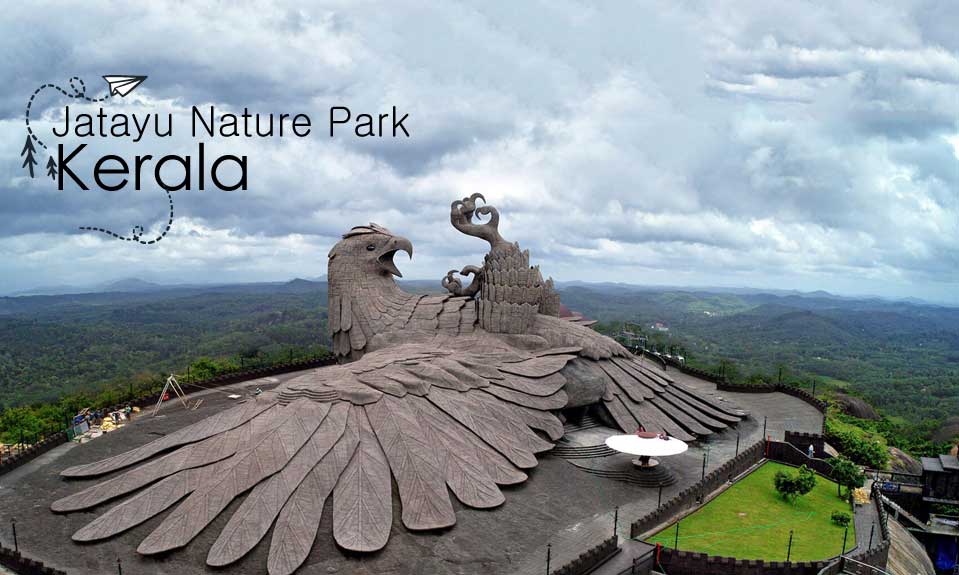 Watch the giant statue of the divine bird Jatayu on your next Kerala vacay and unfold great knowledge on age-old mythology ‘Ramayana.

We all know that God’s Own Country, Kerala, never fails to surprise tourists. Be it be couples or backpackers or family travelers; there are no shortage of place in Kerala that lures tourists. One such new tourist attraction in Kerala that has raised the hair of international tourists too is Jatayu Nature Park.

What Is Jatayu Nature Park?

Jatayu National Park is a nature park project that is named after a mythical bird, “Jatayu” and is a must-visit Kerala attraction. The Jatayu is the same bird that tried to rescue Sita from Ravana. Jatayu Nature Park promotes Kerala tourism, adventure, and mythology.

If you are someone who is a historical buff and possess a deep interest in the cultures and backgrounds of ancient India, then this tourism center in Kerala, also known as Jatayu Earth’s Center, is the most unique and attractive attraction of Kerala. You’ll get to learn the age-old mythology associated with Ramamayana, like how Jatayu Tried to rescue the holy woman Sita from Ravana just before Sita was abducted by Ravana to take her to his Lanka in Sri Lanka.

Where Is the Jatayu Nature Park Located?

The most trending venture of Kerala tourism, the Jatayu National Park, is approx 50 km from Trivandrum Airport. It is geographically located in Chadayamangalam village in Kollam district of Kerala.

Who Is Behind the Construction of This Staggering Idea of Building Jatayu Nature Park?

The staggering Jatayu Nature Park was the initiative of the renowned filmmaker and sculptor, Rajiv Anchal, the chairman and Managing Director of Guruchandrika Builders and Property Private Limited. It’s a massive 100 Crore Project, which was completed with the collaboration of the Kerala Government. Rajiv Anchal is a famous Malayalam Film Director, and he’s from the same district where the Jatayu National Park is built.

Jatayu National Park is the same place where the Jatayu, a giant vulture from epic Ramayana, heard the screams for help of Sita when Ravana was abducting her. The vulture Jatayu was very old, but he still fought bravely with Ravana to save Sita, the epitome of self-sacrifice, courage, and purity from Ravana. In doing so, Jatayu lost his life and was slashed with Ravana’s sword and fell off the rock in Chadayamangalam. Later, when Lord Rama and Lakshman found him, he took his last breath in their arms.

The Cost of Specific Activities at Jatayu National Park:

Due to its proximity from Trivandrum town in Kerala, reaching Jatayu Earth Centre is easy. You can pick the bus option or go for a cab option too!

We hope you all enjoyed reading the Guide to Jatayu Nature Park. If you want to tour this beautiful place on your Kerala vacay, Honeymoon Bug can help you out!