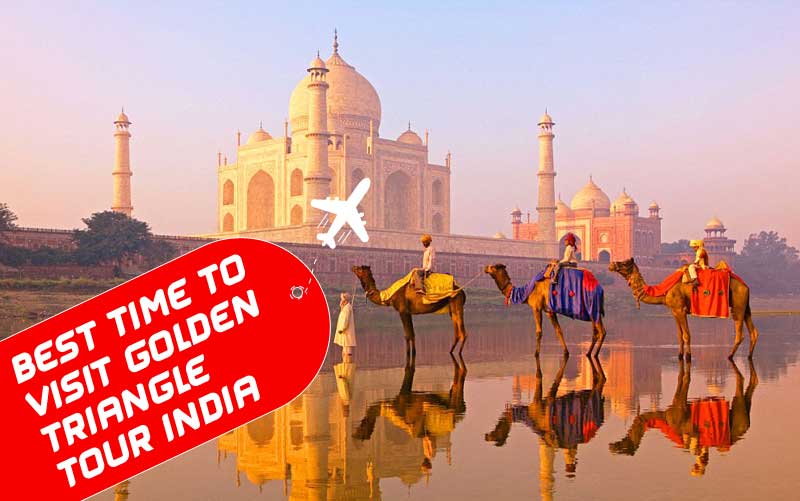 Are you fond of traveling and planning a trip to the Golden Triangle? The best frames of the Golden India tour are Delhi, Agra, and Jaipur. These three cities are the soul of the country that where you will get a glimpse of the whole of India. Here, you can see the history of India, the fort, and many fascinating places. The tour includes the eminent Indian architectural beauty, sights of Rajasthan, and natural beauty.

How Is The Weather Condition?

The three regions of India, Delhi-Agra-Jaipur are very close to each other, the weather conditions here are almost the same. Jaipur is a place that falls in the Rajasthan desert region and this place is known for more exposure to the Thar Desert. These three areas are light of the geographic triangle where you experience summers, monsoons, and winters together and show mostly similar temperatures.

What Is the Best Time to Visit Golden Triangle Tour?

The beauty of Agra’s Taj Mahal is seen during the sunrise, the delicious lip-smacking breakfast of Delhi, and the pink beauty of Jaipur doubles the joy of this tour. People who are looking for a good time to roam here, There will be no better time for them because India is a country where there are four seasons – summer, monsoon, winter, and spring. Rain may vary in these three glimpsed cities. Being in the Rajasthani area of Jaipur, it receives less moisture and rainfall than Delhi and Agra. The long winter months from October to February and the beginning of summer are supposed best time to visit Golden Triangle. Although there is no fixed time to roam, it can be visited at any time of the year, but this is pretended to be the best time to visit in India. Usually, tourists like to visit the most between October and March due to the pleasant weather.

How to enjoy Golden Triangle Tour in the summers?

April to June is the peak season of summers where the sun shines over a large part of the country. But it is considered best time to visit Golden Triangle Tour and Tiger Safari even in the scorching heat. There are also several attractive places in Agra or Jaipur where it is considered good to visit during this ideal time. After traveling a few miles, visit Jim Corbett National Park or Ranthambore. Here in April and May, along with the tiger, go out in search of water, you will be able to spot comparatively more species of exotic creatures.

How to enjoy Golden Triangle in the Monsoon?

To relieve the hot weather, the arrival of raindrops, which gives heavenly relief to the sun-soaked lands? As the raindrops fall on the soil, its aroma relaxes the mind and gives a different feeling of freshness and a view of the surrounding greenery gives a new life, the full flow of the rivers and waterfalls captivates the mind. The monsoon season starts late in Delhi in the month of June-July and there is a possibility of heavy torrential rain. The rains usually come in short bursts and the temperature goes down, according to experts, there is a possibility of flooding during this time, so traveling in this season should be avoided. By the way, this weather is very pleasant, but if there is a possibility of heavy rain, then avoid traveling for your safety.

Some major Indian festivals fall in this period. This season is given great importance for Indian cultural festivals which signify love and affection.

How to enjoy Golden Triangle Tour in the winter?

The peak of the winter season in India begins with the harsh winter of October to February which further adds to the joy of the tour. An average temperature during these falls to 22–32 ° C. The atmosphere not only changes in Delhi and Agra but also in Jaipur in the month of December-January, there is a drop in temperature and due to increasing cold, the hot sand of Thar easily cools to cold temperature. The Taj Mahal in Agra, one of the seven wonders, has a different view of the winter sun. It is no less amazing when the sun is hot and fog-covered in cold air, giving you the best view of the beautiful monument of the Taj Mahal. And with this, you can also taste hot food to enjoy this season in the narrow streets of Chandni Chowk of Delhi.

If you are looking for the best time to visit Golden Triangle Tour then without any doubt you can start from October.

Although festivals are celebrated throughout the year in India, most of the festivals come in these months; a fair of festivals takes place all over India. Some of the major festivals coming from October to March like Diwali and Holi give you a taste of Indian culture.

By the way, a true story is hidden behind every festival of India. This will be the best time to go for the Golden Triangle Tour for those who want to enjoy these festivals with the mythology of India. This month allows you to experience the traditions and cultures of India and make your journey unforgettable.

These are some famous sightseeing of the Golden Triangle that will mesmerize you with their unbeatable beauty along with true Indian culture. If you want to know more about the culture of India, then you are most welcome. We are providing this Golden Triangle Tour Packages for you that target the most popular tourist destinations in India, Triangle cities are waiting for you. This tour will make you visit the entire India through these three cities Delhi, Agra, and Jaipur.