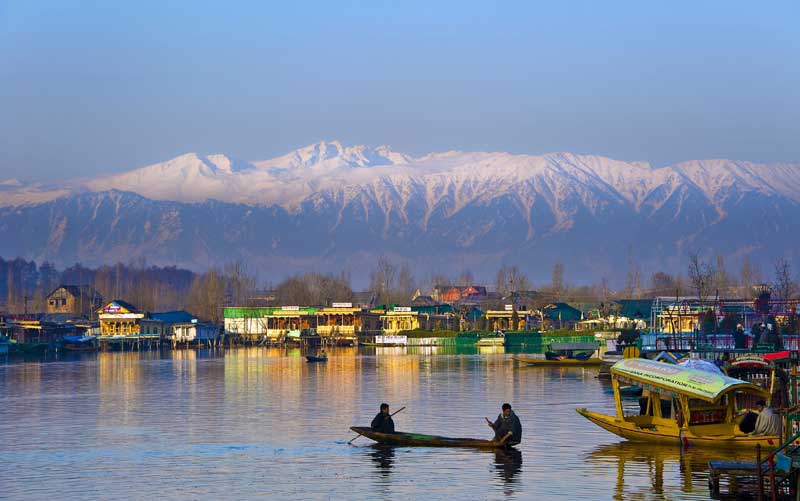 Nestled in the Kashmir Valley on the bank of river Jhelum, Srinagar is one of the best places that you can head to in Kashmir. There are so many best places to visit in Srinagar which are famous for their lush greenery, beautiful pastures and serene lakes. Shikara boats are also one of the well-known for the gardens, serene lakes and majestic mountains.

Further, the place has a pleasant weather all the year, be it summers or the winters. You can head here anytime you feel like as per your accordance. No matter when you come here, you must opt for the adventure activities and a lot of other things to do apart from the places to visit. Also home to several shrines and national parks, Srinagar offers something or the other to everyone and keep them hooked throughout their vacations.

Well-known as the ‘Jewel of Srinagar’, Dal Lake is one of the sought-after destinations that you should visit when in this region. Dal Lake is draped in across around 26 square kilometers in total which is quite vast. Famously known for its spellbinding experience, the lake also offers mesmerizing colorful shikaras where you can take a visit. These Shikaras are basically are the traditional wooden houseboats and you are surrounded by the water all around.

The houseboats are decked up with all the modern amenities which a person can require for. The houseboats will take you through the most scenic vistas in the lap of nature. There are single room and luxury rooms for the visitors and if you come here in winters then you can do the ice skating on the frozen lake.

One of the biggest gardens places to visit in Srinagar, Shalimar Bagh Mughal Gardens should also be on your list. According to the past of the place, the magical garden was constructed by the Mughal ruler Jahangir back in the year 1619 for his beloved wife Noor Jahan. Ever since then, the historical monument is said to the symbol of love. The garden is a perfect epitome of an artificial structures and natural marvels. The place has umpteen varieties of colorful flowers in the garden along with the trees of walnuts and almonds.

Opened for public in the year 2007, the Indira Gandhi Memorial Tulip Garden in Srinagar is yet another best place where you can head to get mesmerized. This garden was built to improve the floriculture as well as tourism of Srinagar. The garden was included in the top 5 best tulip gardens across the globe which made this initiative a huge success in 2017. This garden has the rarest different varieties of Tulip flowers. ‘The Queen of the Night’ was amongst the major rarest tulip flowers.  The place also hosts the perfect annual festival in the month of March and May.

Perched at an elevation of around 1700 to 4300 meters, Dachingam National Park is one of the best for visiting this place. It is covered at an area of around 141 square kilometers. The name Dachigam means ten villages in Kashmiri language and the names has been kept for the remembrance of the 10 villages that were relocated for creating land for the park. The national park is also home to several endangered Kashmiri Stag or Hangul which are only Red Deer species. Other animals can also be spotted in the park and apart from this, the park also offers a chance to do the trekking and see a glimpse of the animals.

Nestled above the Chashme Shahi Gardens, Pari Mahal is one of the most historical places in Srinagar that you must pay a visit to. The Mahal offers the scenic beauty of the around places which are filled with green meadows. The gardens are well-maintained and are surrounded with plenty of trees and lots of flora. It is said that Dara Shikoh who was the elder son of Mughal Emperor – Shah Jahan has built this Mahal. You can clearly get an idea from their architectural work that it would have been made at the time of Mughals. At the time of Dara Shikoh, the building was used as an astrology school.

If you are a big-time fan of getting to know the history of the region then you must pick Awantipora as the major Srinagar sightseeing. This is because, it was an erstwhile capital city of Awantipora during the ancient days and you can get a lot of information about the same. Around 30 km away from Srinagar, the destination showcases the ruins of fine architecture and art during those times and you will be so flabbergasted to see it. During those times, Lalitaditya was the ruler and he built several temples which you will see the ruins of, now. It is the perfect ruins site for the people who want to keep on knowing great things about the past or history.

Crossing River Jhelum in a seemingly North-South direction, Zero Bridge connects Sonwar to Rajbagh. It is one of the top rated places that tourists’ love visiting. This bridge was built back in the 1950s under the Bakshi Ghulam Mohammad, who was the Prime Minister during that time. The bridge was earlier called as ‘Zorr’ Bridge because, it was built by the deaf architecture and in Kashmir, Zorr means deaf. The bridge is said to be impressive and is one of the oldest places in Srinagar. Zero Bridge is having numerous of food stalls and kiosks that serve you authentic dishes of Kashmir.

Also known as Rupa Lank, Char Chinar in Srinagar is a beautiful island of the pristine Dal Lake in the region. This place is named after the Chinar trees that have been all over the lake. The lake has been built by the great emperor Aurangzeb and his brother Murad Baksh. At present, the lake is considered as one of the popular places in Srinagar where you must visit. If you are planning to go on a Shikara ride make sure that you witness all the glorified scenes of the places. Apart from the best tourist places in Srinagar, it is also perfect for taking pictures and photography.

Yusmarg is amongst the Srinagar famous places which is totally surreal and take you through the most breath-taking views. Situated in Badgam, Yusmarg is well-known for its stretches of green meadows. It is also said to be one of the best places for photographers as it boasts several picturesque views. Yusmarg is also a kaleidoscopic place and often offers places where you can stroll around the flower-strewn valleys or even sit by Dudh Ganga River to listen to its music.

If you want to capture the bird eye-view point then there is no better place than Sinthan Top in Srinagar. It is a mountain pass which is located in the mountain range of Pir Panjal. This has been gaining a lot of popularity amongst the people of India and to the other globetrotters across the globe. Since, the place offers breath-taking views; Sinthan Top is an idyllic for numbers of trekkers and mountaineers who come here to experience the thrill.

Inspired by the name of Sunny Deol’s Bollywood movie Betaab, Betaab Valley is a beautiful place in Srinagar. After the famous movie was shot here, the place got an immense popularity on an unprecedented scale. The valley is quite famous for boasting the breath-taking views to the tourists and the pleasant weather throughout the year. No matter you come here in winters or in summers, you will always witness a lot of tourists’ roaming around here. Apart from families also, Betaab Valley is also visited by the couples or by the nature lovers. The place also offers several adventure activities and is also an ideal destination for trekking.

Places like Srinagar can sometimes make you feel so blessed as you get to explore all of these beautiful places to visit in Srinagar with your family and loved ones. So, what are you waiting for? Plan a trip to Kashmir and witness the magical views like never-seen-before and walk down the memory lane later in life.